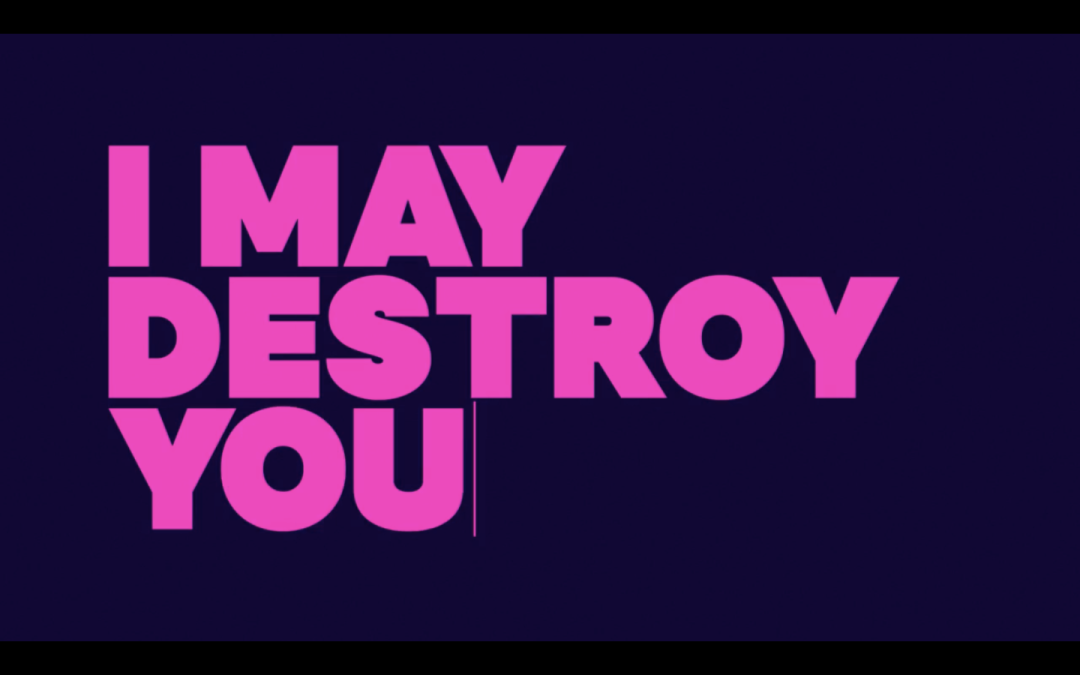 Review: I MAY DESTROY YOU is Crushing, Beautiful, and Revelatory

Those who have read my reviews know that I’m a strong believer in the binge-watch. Or, as I like to call it, immersive watching—like forest bathing, but not at all. Finding a show you love and letting it consume you as you consume it is deeply satisfying. But, I couldn’t do that with I May Destroy You. No, with this show—which is beautiful and painful, funny and gut-wrenching, always brutally honest, and masterfully made—I could only take small bites—an episode, half an episode—before I couldn’t take in any more. But then, after a break, I was always ready to return to it. Now that I’ve finished watching the entire series, which confronts sexual assault and consent from a seemingly prismatic number of angles, I want to begin at the beginning again and watch it from this side, knowing where it all ends up.

After the success of her first book, Chronicles of a Fed-Up Millennial, Arabella (Micaela Coel, who is also the creator, sole writer, and director of the movie) is struggling to complete a draft of her second manuscript. While the first one emerged naturally from her Twitter musings and was published as a PDF, the second one comes with the pressure of agents, a publishing house, monetary advances, and so many expectations. Arabella is somewhat lost about to how to consciously create an entire book. To avoid the reality of her looming deadline, she keeps taking off for Italy to see Biagio (Marouane Zotti), her drug-dealing, extremely non-committal sex partner. We meet her as she’s heading back to London after a visit with him, which was underwritten by her literary agents, where he won’t commit to when or if they’ll talk again.

Once home, she promises her agents, herself, and her best friends Terry (Weruche Opia) and Kwame (Paapa Essiedu) that she will pull an all-nighter in the office to complete the draft by the next morning. But the lure of procrastination is too great, so, after promising herself she’ll only stop for an hour, she heads to the Ego Death bar to meet her friend Simon (Aml Ameen) and his cousin (Ansu Kabia). It’s at the bar that her drink is spiked and she loses the rest of her night. We see her stumbling out of the bar—knocking into people who look at her askance, pulling on the door handles while bent double and swaying—and then the scene cuts to early the next morning when she sits at her computer again, having no memory of anything, a small gash on her forehead oozing blood.

The last part of her draft is garbled and meandering. She can’t remember writing it. She doesn’t know why she’s bleeding. She doesn’t know why her phone is smashed. She has to ask strangers for directions to her own street. It’s when she’s finally home that the memory of an unknown man committing a sexual assault suddenly emerges, like walking into a plate glass window where you thought there would be only empty air. The rape is based closely on Michaela Coel’s own sexual assault, which occurred after her drink was spiked during a night out while she was in the midst of writing the second season of her previous show, Chewing Gum.

Terrified and confused, Arabella tries to piece together what happened, but the memories only come in jagged shards that won’t fit together. Simon, because of his own indiscretions and questionable choices, is cagey and unhelpful, first lying and then evading. She finds Uber receipts, ATM withdrawals and tries to find evidence of what happened. Arabella goes to the police, who are thankfully supportive and earnest, to file a report. You can feel her hope of being seen and heard. But you also see her initial hesitation about whether this really happened to her. She insists that she witnessed a crime, not experienced it herself, and as viewers we are witness to the devastating moment when she realizes the truth—that is was she who was violated. Then, in another kind of violation, she turns her body and belongings over for forensic analysis. You can feel Arabella’s desire for justice and closure, to put this behind her. But you can also sense the futility of finding a nameless predator in a sea of nameless potential predators. Soon after, Arabella is assaulted again, and, once again, she doesn’t realize it at first, but this time because it is rape by deception, and her trust of her own body has already been undermined.

Without any clear path to justice or closure, with two recent assaults weighing on her, the series follows Arabella’s gradual unravelling as she tries to make sense of and cope with what happened. Later, it also addresses the unreliability of memory. How Arabella has often suppressed more unpleasant experiences in her life to the point of forgetting them entirely. How, when we don’t know the full story, our understanding of people’s motivations can be skewed. And, the series also widens its lens to include Kwame’s and Terry’s own experiences with sexual misconduct and sexual assault, their own sort of self-punishment with regard to sexual experiences, and their eventual paths to make peace with that.

Arabella first tries to deflect her pain by making sure she’s always around other people or, during moments when she is alone, repeating phrases like, There’s a war in Syria or Children are dying or Not everyone has a smartphone in a misguided attempt to remind herself of “the bigger picture.” But, as people who have drunk this particular bitter brew of  toxic positivity know, invalidating her own pain only makes her feel worse and her trauma greater. She needs to look inward to heal. Instead, she hides things (literally and figuratively) under her bed until the physical representations of her trauma are oozing out from under it. She becomes obsessed with staking out the bar in the hopes of seeing her attacker, of remembering more. She becomes myopic with regard to victimhood. Hers and the trauma of similar victims on the internet is the only trauma that counts. Through social media, she becomes an advocate for other victims and helps to magnify their voices—she feeds off their adulation and is simultaneously destroyed by their pain and their need for her bravery—but at the same time she lacks any real empathy for Kwame’s experiences, for example. Again, she chooses the external over addressing her internal struggle. She violates people close to her in ways that are borne out of her ordeal and that suggest that, in her quest for vengeance, she could become monstrous herself. (This is true of other characters as well. How their own suffering can lead them to unintentionally violate other people’s boundaries.) Terry, as well, subverts her own and Kwame’s needs in order to try to save Arabella from her downward spiral. She schedules endless forms of self-care, insisting that they will save Arabella from the undertow of anguish, but also to assuage her own guilt for her complicity and to distract herself from her own fears.

Here’s the thing, though, the show is also about so much more than consent. It’s about the experiences of Black Africans living in London, it’s about friendship, it’s about race and racism, it’s about learning to take the time to sit with yourself, it’s about expressing vulnerability through a cardigan, it’s about hair, it’s about empathy, and it’s about acceptance. I don’t think anything that shows up in I May Destroy You—not the costumes, not the set designs, not the hairstyles, not the music—is accidental or coincidental. Every piece feels like it carries weight and symbolism. But, and I have to say this again, there are also moments of great humor, which also feel extremely intentional (and so needed). At one point Arabella is trying to trick someone into believing she is imbibing a drink. Every time he looks away she opens her mouth and lets a mouthful of the drink dribble into a huge black bow on her latex dress; or she hurls part of the contents of the glass backwards over her head. Coel has the amazing ability to move her face and posture from incredibly serious to entirely goofy and back again in a matter of seconds.

And there is still more I want to tell you. Like about Arabella’s relationship with the Black woman who owns the publishing house for her second book. Or about Ben (Stephen Wright), Arabella’s soft spoken roommate, who I saw one reviewer describe as the typical boring white guy, and I couldn’t disagree more. Ben is based on a former roommate of Coel’s, and to me he seems to be more about home and quiet—two things that, in her quest to avoid her pain, Arabella actively avoids for much of the series. It’s Ben, her friends, and herself that she finally returns to in the end. This is all a lot I realize, and there are times when parts of the show feel very confusing, but all I can say is to trust the process, to trust the story because it will all eventually serve a purpose and mostly make sense.

It’s the ending that I want to discuss with you the most, but I know I can’t. I can say that what Arabella learns is to take control of her nightmare, to take control of the shape that her rape and her rapist have taken in her mind. In all her efforts to avoid it, the nightmare has grown larger to become a darkness that hangs over everything, and separates her from herself. At this point, it is less about the actual man who drugged and assaulted her, and more about the idea of him, the memory of him, the damage his violation created. The way it robbed her of control and agency and memory and confidence. And Arabella finds power and freedom in subsuming that idea, that memory, that trauma, that monster. It’s like if you’ve ever woken up from a nightmare just enough to imagine a less terrifying ending, one where you manipulate the narrative. You can’t change the horrors that already happened, you don’t have control over that, but you can decide where it ends up. For me, the choices Arabella makes at the end and the way Coel expresses those choices felt like a revelation. An awakening. An ending and a beginning.

*Clearly my pain scale was not conceived with shows that are beautiful but difficult to watch in mind. But hopefully you get the idea.