Review: Feast Your Eyes on “Emma.”

I’m pretty certain you could watch Emma. without sound or subtitles and still have a perfectly satisfying experience. The general arc of the story is formulaic enough to give you the gist (as always, that’s not meant as an insult), but the costumes, the set design, and the running physical gags and humorous facial expressions make this version feel invigoratingly novel. Admittedly, it’s been years since I’ve thought about the plot of Jane Austen’s Emma and I’m pretty certain I never actually read the book—please don’t come for me, Jane Austen devotees!—so I was confused at first about how some of the characters fit into the plot. It all becomes more or less clear in the end but, if you’re in the same boat, don’t be ashamed to look up some notes before watching. Oh, wait. Actually, don’t do that. Just read this review!

Emma Woodhouse (Anya Taylor-Joy, who it took me some time to stop thinking of as Beth Harmon)  lives a life of utter luxury. The first morning we meet her, she wakes up and heads to her greenhouse before dawn. To light her way, a footman carries a lantern at the end of a long pole, kind of like a boom operator, while a maid follows behind carrying a basket. In the greenhouse, Emma merely gestures toward particular flowers as she floats by in her white dress while the maid carefully clips the stems and adds them to a basket. The finished bouquet is for her longtime governess, Miss Taylor (Gemma Whelan), who is leaving that very morning to marry Mr. Weston (Rupert Graves). Emma is sad to see her go, but also immensely proud that she was the one who set them up.

Emma’s father (Bill Nighy) is utterly appalled that any of the women in his life would get married when they could otherwise continue to live with him in his very large house where he is constantly fretting about drafts. He keeps bursting out with laments of “poor Miss Taylor.” He doesn’t want Emma to make anymore love prophecies because they all end up coming true. Emma promises him to never make predictions about love for herself, but insists she’ll keep doing it for other people because it is “the greatest amusement in the world.” Yes, that’s right, Emma is an extremely rich, extremely bored, extremely self-centered but still good-intentioned young woman who mostly manages her father’s household and entertains herself by meddling in the love lives of acquaintances and dear friends alike so she can avoid any of her own romantical entanglements. And, yes, it’s eventually going to get her into some very hot water in a very staid 18th century sort of way. Anyway, Emma is also all twitterpated about whether or not Mr. Weston’s son, Mr. Henry Churchill (Callum Turner), who was raised by his maternal aunt and uncle and who is heir to their name and fortune—and about whom Emma has heard much but never met—will show up at his father’s wedding. He does not. The audacity!

Later that evening her brother-in-law Mr. Knightley (Johnny Flynn, whose acting and Genetically Blessed Face I always enjoy), drops by, as he often does, for an evening chat with Emma and her father, who mostly shouts about drafts and once again laments Miss Taylor’s marriage before dozing off. Mr. Knightley makes sure to get all cleaned up before heading over to see them. (Thank you very much to the screenwriters, directors, and everyone else who made the Mr. Knightley-getting-changed scene happen for us. Bless you.) And, when she sees him coming, Emma runs to her piano to make it look like she’s been calmly playing instead of, maybe, waiting for him. They argue about Mr. Frank Churchill, whom Emma insists is a total doll and good guy who had to stay home to take care of his ailing aunt and Mr. Knightley contends is a cad who skipped out on his father’s wedding because he didn’t want to come. As you’ve probably guessed, Mr. Knightley is the only person who doesn’t coddle Emma, who openly contradicts her, and who criticizes her, and who stands up for other people’s wishes and rights. (Johnny Flynn plays this role very well with lots of eye rolls and irked expressions.) So you know they’re going to do a lot of heated arguing and disagreeing before separately realizing their attraction, getting insanely jealous, and then finally declaring their everlasting love for each other! All hail the romance canon!

Bored out of her gourd and in need of a new friend/social project, Emma takes Harriet Smith (Mia Goth)—a young woman who boards at a local school and whose tuition is paid by a father she’s never met—under her expensively clad wing. Harriet, overwhelmed by Emma’s wealth, charm, and beauty, is loath to do anything to disappoint her, so she turns down a perfectly good and very welcome marriage proposal from Robert Martin (Connor Swindells), one of Mr. Knightley’s tenant farmers.

Then Emma tries to set Harriet up with the horrible vicar Mr. Elton (Josh O’Connor) who, it turns out, is decidedly not into Harriet and is a letch who wants to get into Emma’s knickers in a marital sort of way that’s still sleazy. (I swear that Josh O’Connor based at least part of his performance as the vicar on The Impressive Clergyman in The Princess Bride, and I’m here for every second of that.)

Anyway, Mr. Elton goes off and marries a terrible woman (played deliciously by Tanya Reynolds who also plays my favorite oddball in Sex Education.) For added excitement, Miss Jane Fairfax (Amber Anderson) shows up to stay with her spinster cousin, Miss Bates (Miranda Hart). Emma—who had assumed she would be able to look down her nose at Jane just as much as she does the good-natured, but overly chatty and socially striving Miss Bates—is crushed and jealous when it turns out that Jane Fairfax is not only pretty, but also very talented and not particularly awed by Emma’s presence. Eventually Mr. Frank Churchill also shows up and there are many misunderstandings, miscommunications, jealousies, secrets, and hurt feelings before everyone gets sorted out, Emma more or less learns her lesson, and romantical unions are sealed.

This movie has all the things you need from a period piece, including romance in the rain, dances, very proper longing looks, so many dresses, and fantastically decorated rooms. I said it before, but it’s so visually satisfying to watch the the movie. There are so many bonnets. All the bonnets. And hairstyles. And there is floral wallpaper and painted walls and folding screens that bring all the saturated blues, greens, pinks, and yellows of the costumes together into a dazzling and rich background. But it’s also the way the movie weaves humor into almost every scene. Whether it’s the footmen rolling their eyes or looking confused, Mr. Elton wheezing with desire to “help,” Mr. Knightley smirking, or Mr. Woodhouse doing pretty much anything. I mean, it’s not a surprise that a character played by Bill Nighy would be a delight, but I was unprepared for how much I would enjoy Mr. Woodhouse’s interjections requesting yet another screen to block out another imagined draft or panicking because it might snow. (One of my favorite parts is where he is almost entirely hidden by folding screens to protect him from drafts.) I was, however, prepared to love Miss Bates because Miranda Hart has not yet failed to make me snort with laughter, and this movie was no exception. Her Miss Bates is absent-minded and overly-familiar in a way that is funny and endearing, especially in how it contrasts with Emma’s rigid formality and snootiness. And—oh my goodness!—just wait until Mrs. Elton bursts onto the scene with her utterly horrifying and fantastic hairstyles and unrepentant name dropping!

I did wish that there was just a bit more heat between Emma and Mr. Knightley. So much of the fun of these movies is watching the romantic flames burn brighter and brighter until nothing can contain them. There were a couple of scenes where you could really feel the tension, but their relationship often felt a little too jocular and too little like smoldering, unacknowledged, and unrequited desire. You know what I mean? I guess at times I wanted more meat on the bones of the movie in general. Like I said, as someone who is not intimately familiar with the plot, I sometimes felt like I could have used slightly more information.

And then there is a part about someone being accosted by gypsies, which is a very small part in the grand scheme of things, but, still, I really could have done without it. I just feel like maybe at this stage in history we don’t need to be maligning and stereotyping Roma people and they could have used a more generic, less pejorative villain.

I did, however, appreciate that, for all her foibles and shortcomings, this version of Emma was quite capable, independent, and intelligent, rather than shallow and flippant. I think Anya Taylor Joy is incapable of anything except intense gazes, which helps make her version Emma feel like a more balanced character. Women of this era are so hindered by limits of society, but really the portrayal of all the women in this movie felt sympathetic, smart, and human, and their concerns valid and real.  Could that have anything to do with the fact the movie was written and directed by women (Eleanor Catton and Autumn de Wilde, respectively)? Uh, for sure it does! 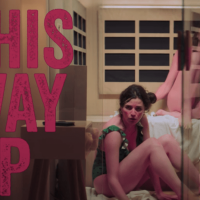