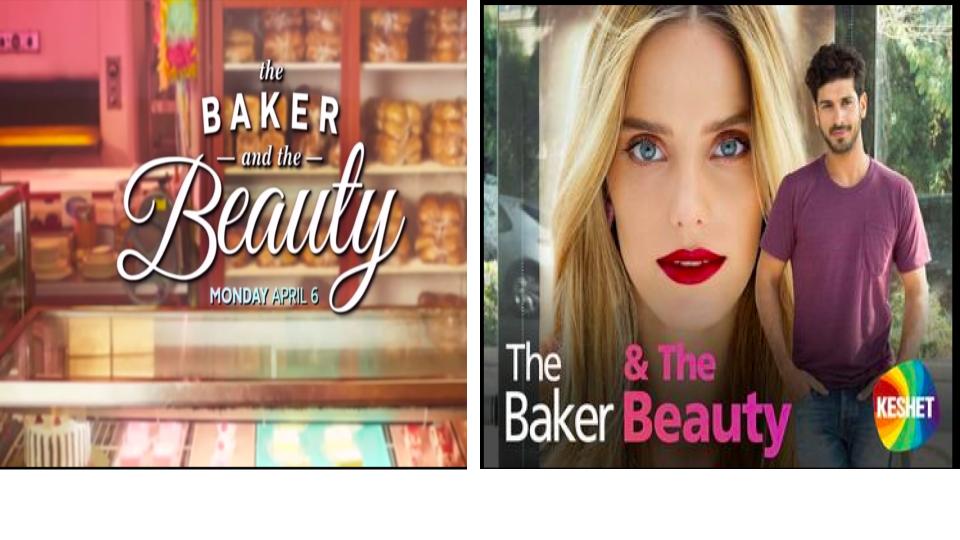 “The Baker & The Beauty”: A Two For One Special!

At first glance, the premise of both the American and the Israeli version of The Baker and The Beauty (which is not a reality show as I, based only on the title, originally thought) seems as likely to crumble as a stale croissant, but, as the show progresses, it reveals some deliciously laminated layers that hold up far better than this analogy! Sadly, ABC didn’t renew the American version for a second season, and it has yet to be picked up by somewhere else. But, once you’ve gorged yourself on all nine episodes, you can start the journey all over by watching both seasons of the original Israeli series (Lehiyot Ita).

In the American version, Daniel Garcia (Victor Rasuk) works alongside his immigrant parents (Lisa Vidal and Carlos Gómez), younger brother Mateo (David del Rio), and teenage sister Natalie (Belissa Escobedo) in their Cuban bakery in Little Havana, Miami. Ever the dutiful son, Daniel has put aside his own dreams in order to fulfill his father’s wish that he’ll someday take over the bakery. Meanwhile, Mateo is half-assing his way through bakery work while pursuing his dreams of making it big as “MC Cubano” (and sleeping with a lot of women). Natalie, a sophomore in high school and the most academically gifted, carries the weight of her parents’ collegiate dreams and grapples with her (mostly secret) sexuality.

We meet Daniel as he is about to go out to dinner with his long-time girlfriend Vanessa (Michelle Veintimilla). She has insisted that he take her to a very upscale restaurant to celebrate their anniversary, which only reinforces his entire family’s belief that she is a spoiled and overbearing nag, who they expect will soon give him an ultimatum about marriage. They all refer to her as “Vanessa Princesa.” Ugh. In the bathroom of the restaurant, while peeing and giving himself a pep about sticking with Vanessa (such multitasking skills!), he runs into the supermodel Noa Hamilton (Nathalie Kelley), who happens to be all over the news because of her recent public breakup. She points out that if you have to talk yourself into something then maybe it’s not worth it, and she lets him know the soup is the only decent thing on the menu. It’s a very special moment in the men’s room.

Then, right there in the middle of the restaurant, Vanessa proposes to Daniel and presents him with a ring (for her hand, not his). When he says no, she yells that she’s a twenty-eight year old woman and this is “what we do. We diet, we get married, we have kids and we diet again.” Which, I know, ew and ugh, but don’t hurl your computer across the room quite yet. Then she dumps his soup on him, announces to the restaurant that she has her own business, can cook, and is now single. And then she walks out, leaving him covered in soup with no ride home. Apparently, a man covered in soup is a big turn on for Noa Hollander because when he leaves the restaurant she follows him and offers him a ride, the shirt off her manager’s back, and a night on the town. (It’s also possible that she is attracted to his face, which meets all the conventional standards for handsome. From a viewership perspective, this is not a complaint on my part.) Admittedly, at this point I almost stopped watching, because do we really need another show that pits the “marrying kind of woman” against the “fun kind of woman” with the poor lost man stuck in the middle?  We do not! We need to burn these stereotypes to the ground. But, as is my wont in such precarious situations, I sallied onward all Nevertheless, She Persisted style. No, please, do not call me a hero. I am too humble for that.

The thing is, after the first episode the series got better, and I don’t think it’s just because my expectations were lowered. (If I were still torturing you with my initial analogy I might say that the flavors deepened or something like that. But I’m not. So I won’t.)  There are really two cores of the nine episodes: the Garcia family and their struggles to remain financially afloat and emotionally bonded, and the more obvious one of Noa and Daniel’s opposites-attract romance.

And then I guess there is Vanessa, who doesn’t fit into either category, but I’m super glad they kept her around, and she (along with Natalie) quickly became my favorite character. Instead of being cast as the one-note stereotype of a “spurned fiery Latina,” Vanessa is strong, loyal, determined, confident, flawed, and funny. I mean, she gets publicly dumped for a woman who is all over the celebrity news and just keeps plowing ahead with her life. And she manages to also support Mateo (who has always been a kind of jerk to her) in his quest to become a DJ with better gigs than his sister’s school dance. Mateo, who at first is all gold chains and obnoxious posturing, also grows into a character with depth and empathy, while still managing to say obnoxious and inappropriate things.

Natalie’s coming out, and her parents’ acceptance of her sexuality, is handled with sensitivity and love. As is her grappling with familial expectations about her studies. (I particularly loved the part when Natalie tells off a girl at school by saying “I live in Little Havana and you’re a third generation Floridian whose street accent drops more than her GPA.”)

Daniel’s parents, who could have easily been relegated to the sidelines, have subplots that are both funny and touching. Even Noa’s snobby manager, Lewis (Dan Bucatinsky), who does his best to get rid of Daniel, has a backstory, a subplot, and an inner sweetness. Here’s a subplot for you! And a subplot for you! Everybody gets a subplot!

Ha! With all those subplots I almost forgot to tell you about Daniel and Noa. But honestly, you probably know what’s going to happen there. Noa quickly falls for Daniel’s humility and his talented hands (For baking! Obviously. Geez, people.). Daniel falls for Noa’s spontaneity and her kindness. Obviously, they both fall for each other’s Genetically Blessed Faces™. I think part of what makes it work is that they are both learning from each other’s worlds. Noa needs the stability of Daniel’s family and Daniel needs the opportunities of Noa’s world. And sure, there are moments where the whole thing feels a bit contrived and bungling, but I’m willing to forgive the series those foibles in exchange for the warm, sweet, and fluffy escapist world it creates.

The Israeli version (which came out first, but I watched second) is largely the same story, down to some of the names and even some of the dialogue, but has an overall more acidic taste, which isn’t a bad thing. In this version Amos Dahari (Avraham Aviv Alush) lives with his Yemeni family above their pita bread bakery and store. He used to have dreams of becoming an artist, but gave them up to help his father. (His art consists of a lot of hedgehogs. Like, A LOT A LOT of hedgehogs. Is there a deeper meaning I’m missing? Someone please enlighten me!)  His brother Assaf (Ofer Hayoun) wants to be a DJ (and sleep with lots of women) and his sister Merav (Shani Aviv) is hiding her sexuality from their conservative parents. In this version, Assaf is more overtly sexist and Merav is more distant from the family. The entire family communicates with barbed jokes and groans about well-worn family anecdotes.

Amos and Vanessa (Hila Saada) break up in the same way, but this Vanessa is less nuanced and more conniving, though I still came to respect and like her for her sheer tenacity.

Noa’s manager Tzvika (Mark Ivanir) is more underhanded in his attempts to tank her relationship with Amos and he has none of the softness of the American version.  (It will come as no surprise to anyone that I prefer the Israeli version of Noa’s manager.)

While what attracts Noa (who is also a little meaner and snider in this version as well) and Amos to each other is much the same here (including their very attractive faces), the divisions of class and race are much more prevalent in the storylines.

Tzvika repeatedly refers to Amos as what the subtitles translate as “negro” and at one point derisively calls him Noa’s “Martin Luther King, Jr.” Noa’s friends (and even Noa) make comments about her dating someone whose family is from Yemen. The racism is acknowledged and called out and the people making racist comments are mostly made to look like idiots. The cues that Amos’s family love and care for each other are less over than in the American version, as is their eventual acceptance of each other’s differences. In one scene someone tells Amos that she heard him arguing with his family. He responds that’s just how they have a conversation. It’s only partly a joke. And I’m here for depictions of families that communicate in a messy, but honest and loving way. Generally speaking, the storylines, like the characters, skew darker and more intense than in the American version. But, although it has more soap operatic elements, it’s still very much a romantic show. Don’t get me wrong, it’s still good escapist entertainment, just with more saltiness and bitterness mixed into the dough, which is just as tasty (if not more so) when you’re in the mood. You should be prepared that there is a mother forker of a cliffhanger at the end of Season 2. An actual gasp-worthy moment before the scene fades to black…forever. Very dramatic stuff.

Look, I’m not saying that either version of The Baker and The Beauty is life-changing entertainment (though I don’t want to tell you about your life), but, depending on whether you’re more in the mood for savory or sweet, they’re both a satisfying enough snack for your eyes.

And since we’re on the subject of visual snacks…

..both of these are quite appealing. 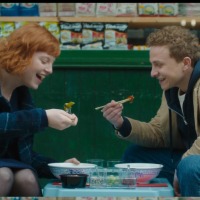 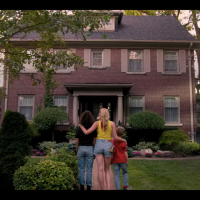 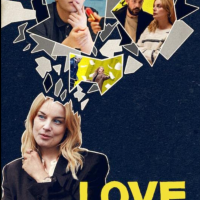 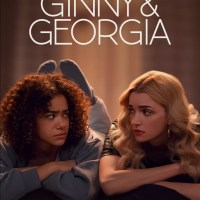 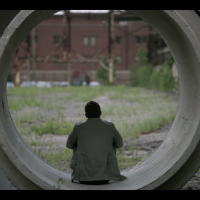 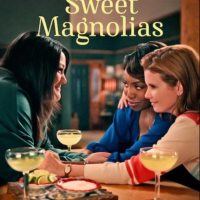 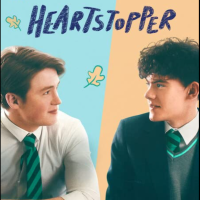